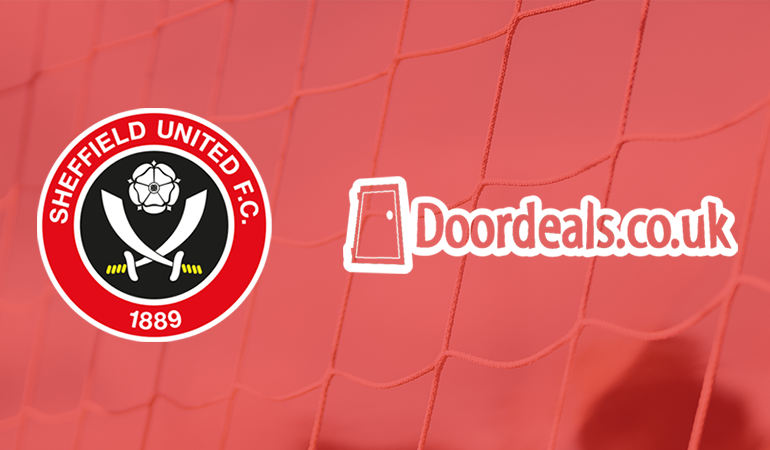 Today, we’re delighted to announce that Doordeals has renewed our partnership with Sheffield United FC as the official back of shirt partner for the clubs playing kits for Sheffield United’s return to the Championship for the 2021/2022 season. The deal not only incorporates the Men's first team shirts but also the Women's first team and U23’s.

"We are thrilled to be able to continue our established association with Sheffield United. . As a lifelong Blade, it gives me enormous pride to see our company associated with our famous club. Next season promises to be an exciting time with the prospect of fans being allowed back into stadiums. As fans, we are looking forward to supporting Both the Men’s & Women’s side in what we hope will be successful partnerships for all parties. I would personally like to thank Paul and Liam from the Commercial team for their efforts in getting this over the line." — Lifelong Blade’s fan and Managing Director of Doordeals Steve Naylor

Doordeals has previously sponsored the Blades on their promotion journey from League One to the Championship, and then the Championship to the Premier League. We were also the Principal Partners of the Sheffield United FC Women’s team for their 20/21 season.

"We are delighted to be able to continue and build upon our previous relationship with Doordeals, as a key commercial partner it was important for us to maintain a connection to the local community and we are proud to continue to associate ourselves with a business that has continued to demonstrate growth and ambition to run parallel alongside our journey as a football club." — Sheffield United's Commercial Key Account Manager, Liam Robinson

Established in 2007, Doordeals has quickly grown to become one of the UK's leading independent online timber door retailers. Our roots originally began back in 1971 where the Sheffield based family business forged its reputation for excellent quality affordable products, knowledgeable staff and outstanding customer service; the same values Doordeals lives and breathes today.

In 2020, we outgrew our showroom which was based just a few miles from the Bramall Lane grounds and moved to a larger showroom, offices and distribution centre at the Sheepbridge Trading estate between Sheffield & Chesterfield.

Keep an eye out on the Doordeals social media accounts throughout the season as we’ll be running several competitions for Blades fans to win exclusive prizes, along with offering discounts on Doordeals products.